Eight of us met at what used to be a lay-by at the head of Creswell Dale on the A623 near Wardlow Mires for a trip into Neptune Mine. Unfortunately, the old lay-by has been replaced with a length of hatched white lines and angry words saying "Keep Clear", so, not wanting to get ticketed, we transferred our parking arrangements to the car park of the nearby Yonderman's Cafe (which was closed). In future, when visiting Neptune Mine, it may be better to park on the lay-by on Mires Lane, which leads from the A623 to Litton, and then walk down into the dale from there. 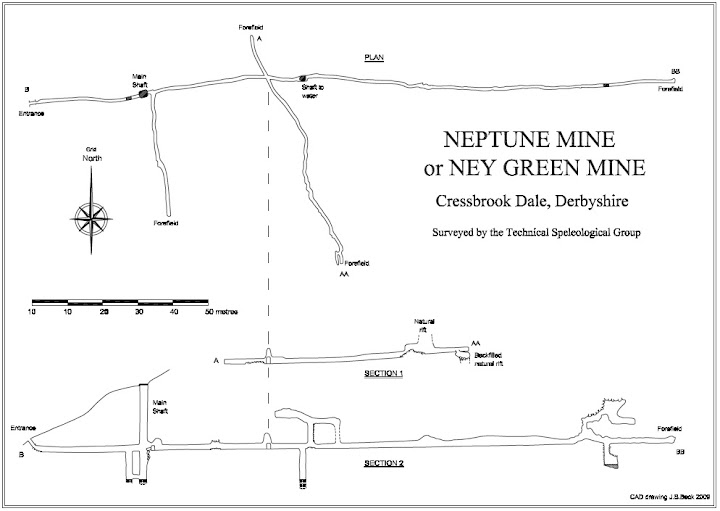 It was a very warm evening, and quite pleasant walking down the dale, past Peter's Stone, much to the amazement of the local rabbit population. Finding Neptune Mine is quite easy, as it is just up to the left of the first gate that crosses the path. Not quite so easy is opening the mine, which requires the use a large (20mm) spanner to loosen the captive nuts which allow the lid to be slid sideways and thence swung upwards.

The lid reveals a smooth (and slippery) body-sized plastic tube, which slopes downwards, and can make exit difficult. To assist with this, I added a length of 7mm emergency rope to the entrance for later use. The plastic pipe leads straight onto a corrugated pipe which takes you down to an awkward squeeze through a boulder ruckle, which is obviously the remnants of the collapsed sough tail. Passing through this, we stooped and crawled through puddle and mud to a small stope, and then on to the main shaft, which is entered at quite a height. Often this shaft is flooded, as are the several winzes which are met later on, but tonight's trip followed several weeks of drought, and, in a way which will be familiar to many JH cartgaters, this can make the traverses seem quite a bit more exposed!

However, crossing the main shaft is by far the worst, as it is done on a "Heath Robinson" bridge arrangement, cobbled together from bits of old wood and railway track. The paired ropes for those who bothered to bring cows tails do precious little to reassure! (See picture below.) 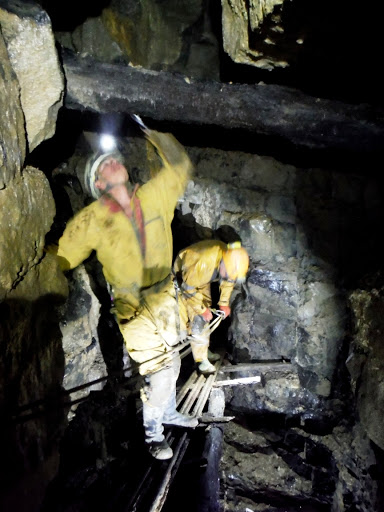 More stopes and stemple-supported packwalls followed to a junction formed by two cross cuts. We examined the right hand passage, and followed it to its conclusion just past a collapsed, back-filled passage. Back on the main drag, we were treated to further stopes and hanging death interspersed with ticklish traverses around unbridged (and unroped) dry winzes; all this leading, eventually, to the final blank wall which is "all she wrote" for this level, although I'm sure that the normally flooded levels below will have gone much further into the hillside. The retreat to the surface wasn't without incident, as Jess entertained us first with a tricky climb up into a lofty stope, followed, several metres further on, by somehow causing an exceedingly noisy packwall collapse - note my expression on photo below!. Fortunately nobody was hurt by this sobering incident, and all managed to surface intact. 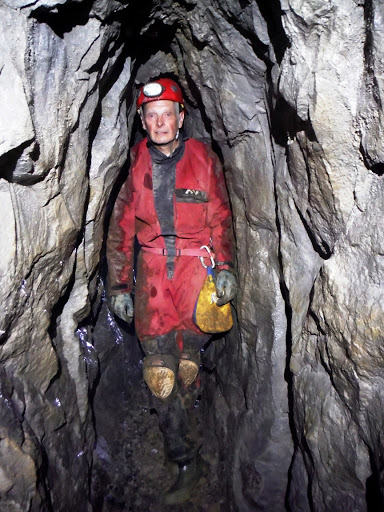 Throughout the trip, I sampled the CO2 levels in the mine (as part of my job monitoring CO2 levels for DCA) and the results are as follows:-

Here's a shot of the group outside the entrance, after the trip (all pictures by Alan Walker). 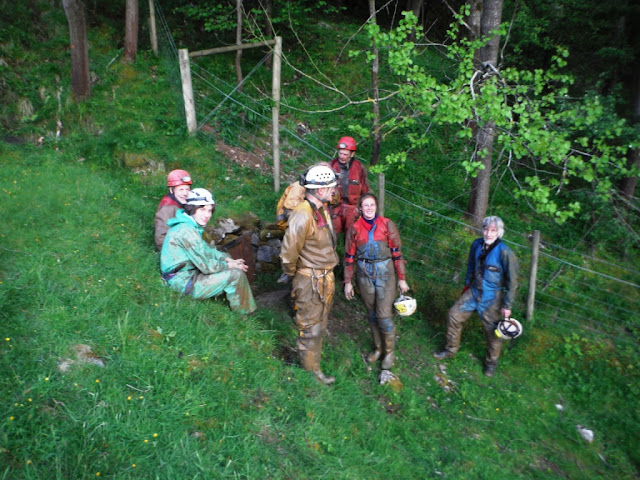 As I had a very early start planned for Wednesday morning (annual emergency light test at the Chapel), I decided to fore-go the pub for once, and left the others to go up to Litton, where the annual Wakes celebrations were presumably in full swing.