Saturday, 19 May, 2012
Having eaten my second breakfast in the Chapel with the old lads from the Eldon, who went on and on about the total bunch of lightweights which they reckon constitutes the modern DCRO, I left them to their Titan trip while I headed up to Speedwell armed to the teeth with tea, snap, rope, tools, drill and a bunch of thunderbolts. Everybody I had asked was injured, poorly, on holiday or swanning off to the Mendips for a Swillies round trip. But what did I care? Billy-No-Mates Brentnall, that’s me. Two right heavy bags, and the last few bolts to tap into the rock above the new pipe to clear it out of the way of passing cavers. What could possibly go wrong?
The boat banged its merry way along the near canal. I was the only passenger on this Stygian voyage. The boatman didn’t need to say a word ... and didn’t. Even when I said cheers mate, see you in a few hours, he just grinned in a Hammerish way, like he knew something I didn’t - and, as I carried my two loads by the Bottomless Pit, towards the far canal, I’m sure that I heard a low, fiendish chuckle. But, when I looked back, the boat had gone and I was alone. The far canal was brimming full with deep, cold water and I lowered myself in. The rope bag was on my shoulders, and the bag with the tools and the drill in I held up above the water, and, taking care to walk slowly, so my feet could detect those objects which trip and make you stumble, I made my way along the canal.
Passing roaring overflow dams, and taking care to avoid the sandbag dam which Steve Knox and I built the other summer to try to retain some water for replenishing the other canal, I slowly approached the ominous rumble which I knew was The Bung. Round a subtle corner, past the skeletal ribs of an old miner’s boat, I met the gate which was locked as usual. The key was around my neck and I carefully stooped and slid it into the steel padlock before turning it to release the chain which held the gate. Passing through and, knowing it was Saturday, and the Peak Speedwell had many visitors, I carefully re-locked the chain and approached the roaring Bung.

Cold deep water flooded over the new coping stone which Ralph had placed upon the dished walling of the Old Man’s dam. The new ladder stood cold and proud dividing the torrent into two heavy cataracts which tumbled into the black of the Lower Bung passageway. “Glad I don’t have to go down that,” I thought as I turned ... and then I was sure that I heard the same low, fiendish chuckle. But, looking back, there was no one there. Up until now the water had been deep and cold. Passing from the Bung into the passage towards Pit Props, it got deeper still and I waded very carefully with the drill bag held at head height. “Bob Toogood’s going to have fun here, “ I thought.
But it wasn’t long before I reached the Whirlpool junction with its Via Ferrata (wire well under the water) and the huge torrent surging out of the side-passage. Interestingly, the Whirlpool Passage was providing the bulk of the water, and the stream up towards the Boulder Piles was quiet and of much more normal proportions. Reaching the Boulder Piles, I turned right into the connecting passage which leads to the ladderway and up into Leviathan. The pipe was working well, and the whole passage was dry. I climbed the ladders and examined the pipe as I went - looking for leaks (there were none) and points where an extra bolt might pull the pipe away from passing cavers.
Pushing the heavy draught-lid at the top of the ladders, I entered Leviathan itself, and, quickly sorting my equipment, I got out the camera and took some shots of the new hopper which Ade, Lee, Roy and Phil had brought in and set up to merge the two pipe-loads of water into one. I knew that, three weeks ago, Speedwell Cavern had been subjected to a severe flood and was pleased to see that the hopper looked exactly as it should. We seem to have arrived at a solution which works! 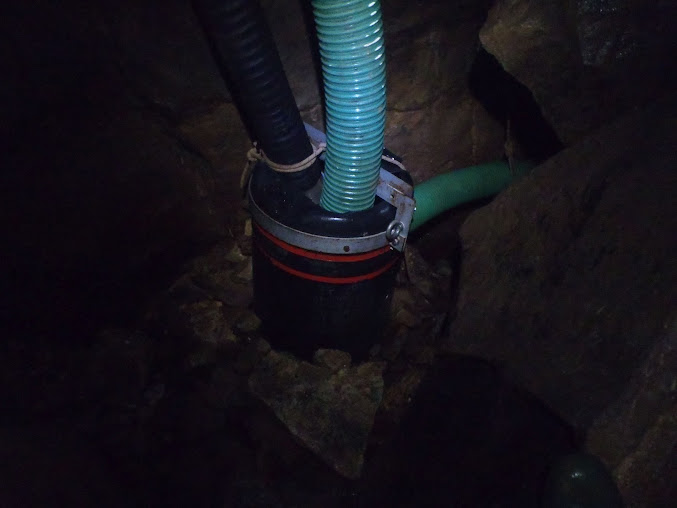 Having examined my colleagues’ handywork, I set about drilling and placing the thunderbolts, based upon my examination as I climbed the ladder. It’s a bit eery working on your own, and you start talking to yourself, singing (but never whistling) and even having small arguments. I had just about finished my jobs when, suddenly, I heard voices, and as I pulled back up the ladders, Phil Burke appeared in front of me followed by Dan Hibberts, Rory Gregory and Bob Toogood. The Eldon lads. We had a brief chat and then they set off to go into White River, while I collected my tackle and started to tidy up and finish off.

After a quick brew and a bite to eat, I descended the Speedwell Stream and passed the Bung making for the Speedwell Gate. The bags were feeling quite heavy by now, but I knew it wouldn’t be long before I was on the boat heading out. Placing the key into the circular steel padlock I tried to turn it ... but it refused. This is a normal occurrence, caused by internal corosion and grit entering the lock during floods, and the usual remedy is to gently “waggle” the key until it starts to move in the correct direction. This I did, but, to my utter dismay, the key simply snapped in two under very little pressure, leaving me with half a key in my hand, the other half in the locked lock and a distant, low, fiendish chuckle echoing around the passageway somewhere behind me.
So ... after thinking various things which translate to “well I never” and “my word” (but which had much, much more feeling) I thought about my options, of which there were several - but my main concern was the Crewe Drill. Obviously, I could leave the drill here, hung from a high point on the gate, or even down at the foot of Block Hall. But I didn’t know when would be the next opportunity for retrieving it and didn’t want to risk leaving such a valuable item.
I didn’t think the sneaky route via Troubled Waters would be the best route for the health of the drill, and, for a minute or two, I considered following the Eldon team up into White River - but they were travelling way too slowly, and I didn’t want to risk getting back to Speedwell after closing time. The time factor applied to the Titan route too ... which left Colostomy Crawl.
Colostomy Crawl is now a shadow of its former self. Evil, wet, crawly bits could now be walked (with a bit of a stoop) and it might just work. But could I manage to keep the drill bag out of the water? Well there is only one way to find out! Carefully descending the Bung ladder, holding the drill at arm’s length out of the water, I made my way downstream and called in at Block Hall. Sure enough some of the Eldon lads were still queued up below the ropes - I chatted to Phil for a few minutes, making sure that he knew where I was headed (just in case) and then set off downstream in search of the Short Bypass.
At Egnaro Aven, I removed any dangly bits from my SRT rig- the only reason I was wearing this was so that I could have hands-free while drilling in the Boulder Piles ladderway; I’d also brought a rope, just in case, but this had proved unnecessary. I considered removing my rig totally, but decided to keep it on so that I could drag my rope bag behind me - leaving two free hands to try to protect the drill bag. And so, in some monstrous parody of a limbo dancer’s medicine ball exercise, I slowly made my way through Colostomy Crawl, Liam’s Way and the Trenches, and, it was with some relief that I reached the ladder on Fawlty Towers. The rest of the trip was a bit of an anti-climax really:- stagger and stomp through the Upper Gallery; wash off in the streamway after Victoria Aven; the long grind up the road to Speedwell and John Harrison - ”Do you want the good news, or the bad news?”
As I write this, the lock is still locked. The half key may come out with long-nosed pliers, or it may not. Ralph is going to try and sort out a new lock in time for the next trip in.
But watch out for that low, fiendish chuckle.